How is Tequila Made? (All You Need to Know About Blue Agave)

Tequila is an alcoholic beverage commonly consumed neat- in one shot. Although it is a very popular choice of alcohol worldwide, this beverage essentially originated from Mexico way back in the 15th century. Even today, it is an integral part of Mexican culture. In fact, it is recognized as the National Drink of Mexico! Also, did you know that primarily all of the world's tequila supply comes from Mexico?

Well, now you do.

Tequila is fermented and distilled from a single type of agave plant, the Blue Weber Agave tequilana which grows almost exclusively in Mexico. There are about 85,000 acres of land in Mexico designated for the production of blue agave. The magnificent landscape is even recognized as a World Heritage Site. The word agave comes from the Latin word which means admirable and illustrious and once you read more about this plant; you would agree too.

The states of Jalisco, Colima,Nayarit and Aguascalientes are the leading producers in the country and account for the major share of Blue agave, more commonly referred to as Tequila Agave. These states offer the most optimal environmental conditions that are favored by Blue agave. For example, the sandy, rich soils, or the 5000 ft altitude. The blue agave plant grows to a maximum height of 7 ft and has characteristic spiky leaves that surround the inner succulent part. Many people associate this plant with cactus, but it is a different species altogether- it is actually more closely related to the water lily.

Even at optimal environmental conditions, the blue agave plant grows very slowly, taking around 5 to 12 years to reach maturity. A tell-tale sign of maturity for these plants is the loss of pencas- the lowest leaves on the plant. In addition to this, the blue agave plants flower only once: at the very end of its life. A stalk-like projection emerges from the central part of this plant and then proceeds to send out puffballs of flowers. Soon after this, the mother plant dies. However, for the production of tequila, this stage is never achieved. 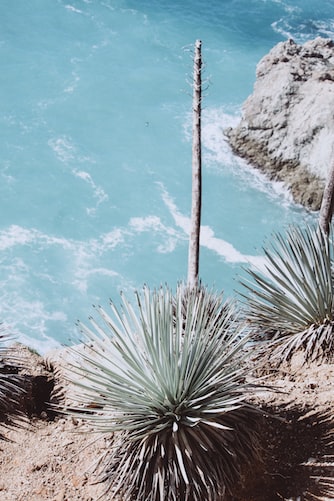 The Agave tequilana Weber blue produces a sugary sap just before flowering. This sap is the main ingredient for tequila. A special knife called coa is used to hand cut the succulent part and obtain the sap, known as pina. To obtain the succulent part, the coa is used to cut the leaves exposing this hidden gem. However, less skilled harvesters often do not cut as neatly, and parts of leaves remain with the pina. The leaves adversely affect the taste of tequila. However, this benefits the harvesters as the pina is sold in terms of mass. To cope with the problem, many companies in Mexico grow their own plants. Pina from mature plants has a higher concentration of sugars and thus produces better tequila. On average, around 7kg pina is required to produce 1 liter of pure agave tequila. 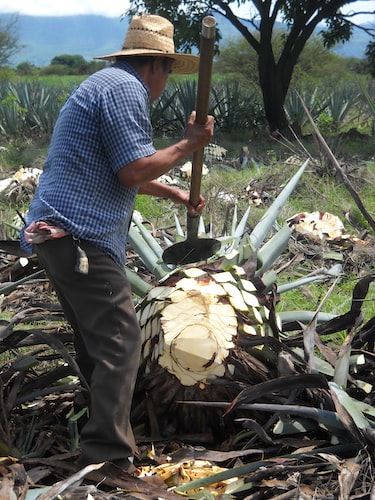 Stage 2: Extraction of Sugars for Fermentation

The harvesting of pina is manual labor that takes both time and intensive effort. The laborers are often people who are well versed in this plant and check for the signs of maturity before they harvest it. Entire fields are usually harvested at the same time. After harvesting, the pina bulb is baked to ease the extraction of the sugars which are then used for fermentation. In the past, rock-lined baking pits were used for the process, but nowadays, clay and brick ovens are usually employed.

The baked pinas are then thoroughly crushed and shredded to extract all the sugary sap. Traditionally, manual labor was employed for the process; a large stone wheel was used to crush the pina. But now, technological advancements have eased the process with mechanical shredders. Today, both of these processes are employed in Mexico. After extraction, the resulting sweet juice is referred to as mosto. 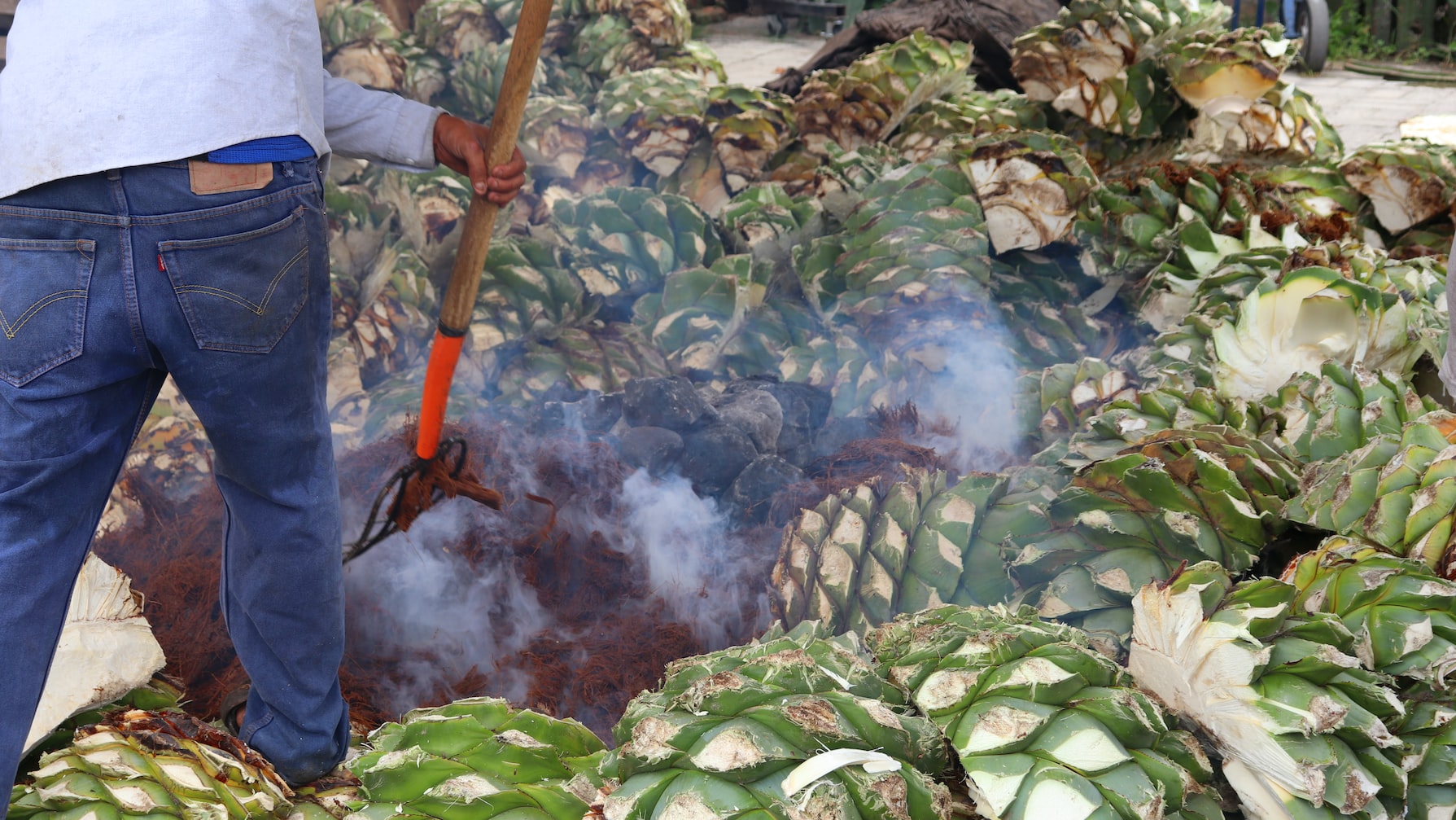 The mosto is then fermented with yeast to produce ethyl alcohol, which is commonly referred to as alcohol. The process employs large fermentation tanks that provide the optimal environmental conditions for fermentation. For better hygiene, either stainless steel tanks or wooden barrels are used only.

After a good amount of alcohol is produced, the mixture is then distilled to separate and concentrate the alcohol. For the production of tequila, the distillation is carried out twice, or sometimes even thrice. This is because each distillation milds the taste of liquor and produces smoother, purer products. After the successive distillation, the product is clear, silvery tequila, which is ready to be aged.

The aging process takes at least a minimum of 14 to 21 days. However, there are three main types of tequila and their aging time varies from 2 months up to 3 years.

Blanco, for example, is often considered as the most briefly aged tequila. It is kept in stainless steel tanks for only a few weeks (usually 8 to 10 weeks) before being bottled. Reposado on the other is aged for a much longer duration than that. On average, it takes about 2 months to 12 months (less than 365 days) for Reposado to be aged. Oak barrels are usually employed for the process. Finally, the most premium tequila from the three categories is Anejo. This is aged for around one to three years. Extra Anejo is the most recently added category and is aged for more than three years. 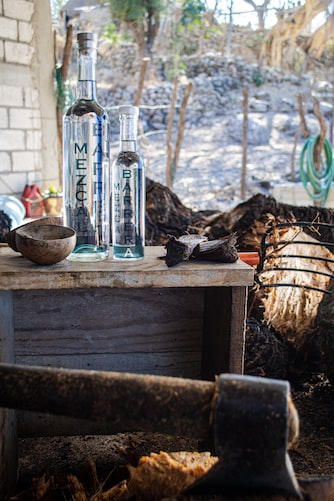 WHERE IS TEQUILA PRODUCED IN MEXICO?

Although you might think that tequila is manufactured throughout the country, tequila is licensed to be produced in the state of Jalisco only. So, the primary supply of the world's tequila comes from there!

However, some other municipalities such as Guanajuato, Michoacan, Nayarit, and Tamaulipas also produce small amounts of tequila. To regulate the production of tequila, the Norma Oficial Mexicana (NOM) has strict criteria which need to be met, for a spirit to be called tequila. The Consejo Regulador del Tequila or (CRT) then certifies the tequila produced.

Here are the five states that are allowed to produce tequila:

One of the most important regulations regarding the production of tequila is the percentage composition of blue agave distillate. In order for a spirit to be called tequila, it must contain at least 51% blue agave plant distillate, specifically, the Agave tequilana Weber blue. The remaining 49% composition could be sugars, or additives, etc. This type of tequila is readily available in the country, even on supermarket shelves at a pretty affordable price.

However, if you wish to taste real luxury, we suggest you look for 100% agave tequila. This premium beverage consists of 100% agave distillate and its production is strictly regulated by the CRT. The regulatory council overlooks 135 licensed manufacturers in the country. CRT is also the governing body when it comes to exporting licenses and bottling. You will often see the CRT label on the bottle of a licensed tequila manufacturer. However, there are some small family-owned distilleries that are not governed by CRT.

There are marketing tricks to selling tequila. You will find that there are a lot of tequila manufactures who will say their tequila has been aged for 5-7 years. However, this doesn't mean that the tequila is better. Check out this video about the marketing scheme behind tequila:

Tequila is a big part of Mexican culture and it is good for tourists to learn the proper etiquette when drinking it, so as the locals say, "Salt and limes are only for tacos."

Is Guadalajara Safe? Safety Tips for Traveling to Guadalajara, Mexico for 2021

Have you been to Tequila, Mexico, or explored one of the five states tequila is made in? Leave a comment below!

Popular posts from this blog

Is Guadalajara Safe? Safety Tips for Traveling to Guadalajara, Mexico for 2021

June 06, 2021
Guadalajara is the second-largest city in the state of Jalisco and it has many things to offer first-time visitors. When traveling to Guadalajara, you will be engulfed by its beauty, delicious food, and history. However, before you pack your bags, you may be wondering if Guadalajara, Mexico is dangerous to visit?  Generally speaking, Guadaraja is a safe place for tourists to visit. Nonetheless, it is important to take necessary precautions before visiting a large city like Guadalajara. Like other large cities, there is a crime, but travelers will be happy to know that they will be safe when visiting Jaliscos second-largest city.   Traveling to another country or city can be intimidating because of the unknowns. Usually whatever you put in your head about a place is usually the complete opposite of what it's actually like. For example, I had reservations about going to Guadalajara because of what I had read online about the crime. But, when I finally made it to Guadalajara I was met
3 comments
Read more

June 28, 2021
Chichen Itza has a 1000-year-old incredible history, but unfortunately, it is not for the faint of hearts. This pre-Hispanic city is shrouded with ancient Mayan temple ruins that narrate gruesome stories of old times. Amidst the hustle-bustle of countless street vendors stands an entrance leading to ancient stone carvings of blood-thirsty warriors and fearsome creatures. Chichen Itza is a place that inspires awe. Due to its close proximity to Cancun, Chichen Itza is factually the most visited archaeological site in Mexico. This historical site sets in the Yucatan Peninsula, with all its extensive ruins covering over 740 acres. Many sections of this site are still unearthed. Just listening about this city stimulates curiosity. While wandering around this gigantic archaeological location in Mexico, one must wonder what lays excavated beneath their feet. Why not wonder and wander together? Discover our most luxurious and affordable tours to Chichen Itza and join us for the ride
3 comments
Read more